The Curious Incident of the Neuroleptic Prescription

Exposé exploring neuroleptic action at the neuronal and neurochemical level with emphasis on the efficacy of off-label prescribing and diagnostic criteria.

Your brain is a complex circuitry of approximately 86 billion neurons, each projecting axons and dendrites to proximal (nearby) and distal (far away) regions. Neurons are not created equally. Rather, each serves a specialized function. For those with thought disorders (psychosis), the culprit seems to be malfunctioning neurons specifically in striatal regions within the brain’s evolutionarily ancient limbic system. Only neurons in these regions need to be treated, which means that the majority of neurons throughout the central nervous system (brain and spinal cord) are otherwise healthy. Refer to Figure 1. 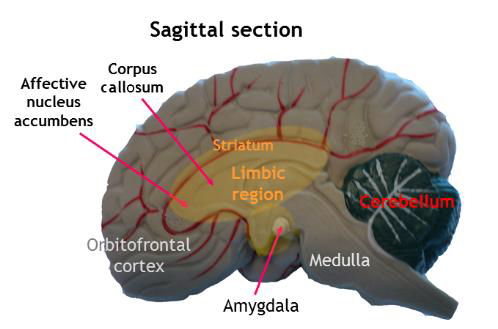 – Factoid: Poltergeist activity is oftentimes attributed to prolonged exposure to low level household carbon monoxide (CO) (Grant, 2015). CO exposure can induce hallucinations, inclusive of a physiological sense of doom (heart palpitations, anxiety and flushing). In lieu of recruiting a ghostbuster, exorcist or psychiatrist, just check your CO detector. But back to the story.

Neurochemistry, transmission and dosing of neuroleptics

Neuroleptics are psychoactive drugs belonging to the class of major tranquilizers, prescribed to treat psychosis. Zyprexa (olanzapine) is a popular neuroleptic developed and marketed by the pharmaceutical company Eli Lilly (Lilly). Refer to Figure 2. How do neuroleptics work in the brain? 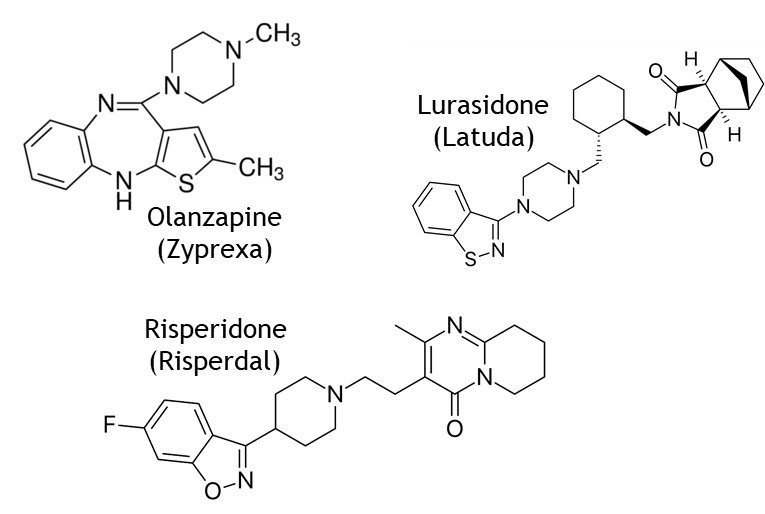 Neuroleptics (antipsychotics) belong to the class of major tranquilizers with similar psychoactive actions. Chemical structures of exemplary neuroleptics are shown in this figure. Zyprexa and Risperdal are popularly prescribed for schizophrenia and Latuda is commonly used to treat bipolar disorder and major depression.

Neurons in your brain talk to each other using the language of neurotransmission. Neuroleptics work by blocking monoaminergic (catecholaminergic) receptors in the brain. By design, neurons each have specialized receptors on their surface membranes activated by various neurochemicals such as monoamines – imagine them like little electrical outlets. Monoamines (dopamine, serotonin and noradrenaline (aka norepinephrine)) are readily convertible chemicals that transmit signals between neurons by plugging in to these receptors, switching them off and on.

Monoamines are associated with mood. Dopamine regulates emotion, motivation and reward whereas serotonin is generally associated with pleasure. Monoamines change the relative contribution of other neurotransmitters in your central nervous system, both excitatory (glutamate and histamine) and inhibitory (glycine and GABA). That is, monoamines are like the lubricant ‘WD-40’ of your brain. Refer to Figure 3. 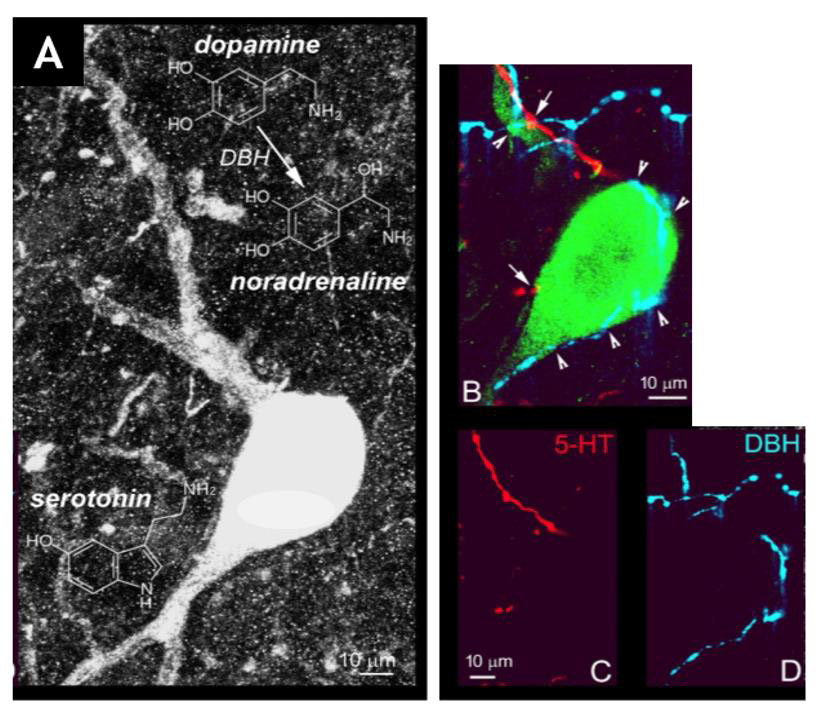 There is no evidence that the schizophrenic or bipolar brain has too much dopamine. Rather, dopamine specifically in limbic/striatal regions of the thought disordered brain is misallocated. Too much dopamine may be sequestered by limbic/striatal neural receptors, disproportionately leaving too little between neurons, thus hampering cross-talk between neurons. While neuroleptics do target limbic/striatal regions, the salient issue is that these agents block neural receptors throughout the entire central nervous system indiscriminately and unnecessarily. Yes, the whole enchilada.

The usual dosing for Zyprexa is 5 to 20 milligrams once daily administered orally. Psychiatrists notoriously advise that their patients take neuroleptics for the rest of their life, even if psychotic symptoms may be fleeting. Heavy emphasis on the consequences if their patients do not comply. Further, institutionalized or hospitalized patients may be forcibly drugged against their will (Gottstein, 2020).

To compound neuroleptics’ ‘sledgehammer’ approach, neurons are very adept at growing new receptors to compensate for those that are blocked. Psychotic symptoms then rebound with a vengeance. As per psychiatric protocol, dosage of the neuroleptic are then increased accordingly – if the treatment is unsuccessful, just add more. Now the vulnerable patient really is incapacitated, complacent and permanently mentally ill. Snowball effect.

– As a quick fix, acute psychotic episodes can be squelched with a big dose of the common over-the-counter anti-histamine allergy medicine Benadryl, aka diphenhydramine (50+ milligrams), although certainly no cure! Benadryl works by blocking histamine, an excitatory neurochemical. By the same token, pretty much any sedating drug will work, such as benzodiazepines like Ativan, which is an especially fast-acting titration. But back to the story.

The outstanding problem is that these various disparate conditions, each with very different etiologies, do not necessarily entail psychotic symptoms and/or dopaminergic dysfunction at all. Throwing the proverbial dart at the open Diagnostic and Statistical Manual of Mental Health book, yes? Indeed, dopaminergic inhibition is contra-indicated in many of these conditions. So what motivates psychiatrists to off-label prescribe neuroleptics in these cases?

Psychosis is a transitory symptom. Those with schizophrenia and bipolar disorder are not psychotic 24/7/365, but rather experience episodic states of psychosis. Neuroleptic drug action is continuous, however. Pharmacologically, do the psychokinetics of neuroleptics match intended therapeutic goals? Let us consider the ubiquitous scientific concepts of accuracy and precision.

‘Accuracy’ refers to how close the given acting agent is to the intended target. In this case, let us imagine any given neuroleptic is the agent and aberrant neural receptors are the target. Alternatively, ‘precision’ refers to how close the acting agents are to each other. Such agents may totally miss the target, but they are precisely clustered. For effective utility, any given pharmaceutical agent must be both precise and accurate. However, neuroleptics are neither accurate nor precise. Refer to the Figure 4. 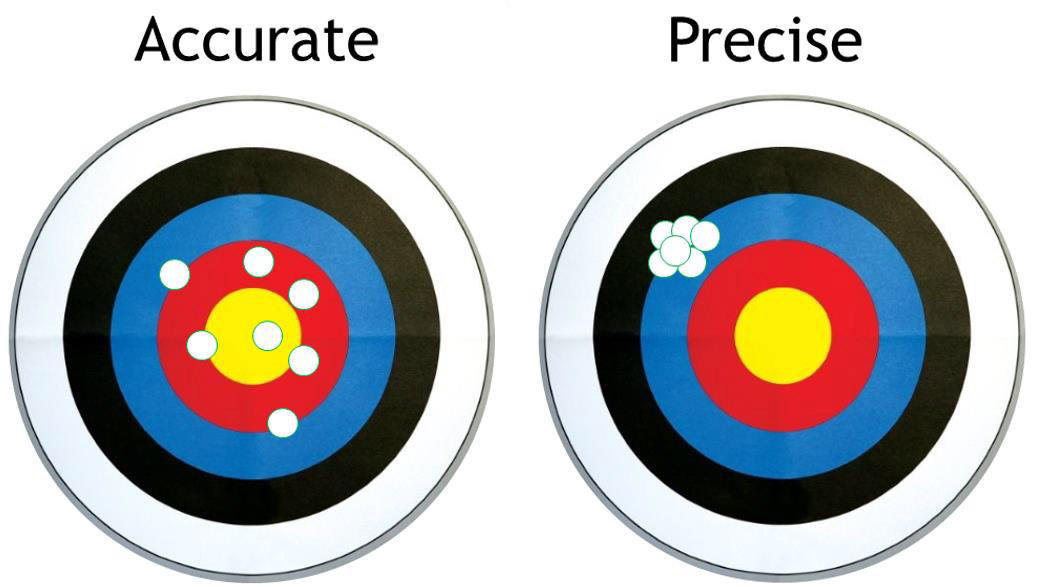 Tinkering with neurotransmission may have deleterious side effects (e.g., Gottstein, 2020; Boushra & Nagalli, 2020). Indeed, the daunting toxic side effects of neuroleptics include the following non-exhaustive list:

To preface, as a forensic neuroscientist with an analytical laboratory background, operating based on evidentiary data informs my decisions. Scientific methodologies quantify evidence that is verifiable and repeatable. So inferring pivotal conclusions with gravitas about nuanced human psychology makes me cringe.

Psychiatrists may refer their patients to clinical psychologists for a formal diagnosis to help determine the course of treatment. Self-reporting tests such as the Minnesota Multiphasic Personality Inventory (MMPI) can help guide the clinician. To titillate my readers, let us sample a few representative questions from the 567 total yes/no MMPI questions:

Ad nauseam. Onto the Rorschach inkblot test, premised on the concept of pareidolia, the perceptual tendency to assign meaning to ambiguous stimuli, such as seeing clouds shaped like hippopotamus, Jesus Christ on toast, etc., ostensibly determining your mental and emotional functioning and personality. As an exercise, let us look at three representative inkblots together. Refer to Figure 5.

Can you guess? The problem is that there really are wrong answers to such diagnostic tests. Human behavior is dynamic and responses to such queries is variable depending on external circumstances, environment, mood, being hangry, etc. and the very hortative nature of clinical practice. There is naturally a great deal of behavioral variability between people, so diagnostic errors happen inevitably. In this author’s opinion, these baseless tests are pseudoscience. Psychological examinations are necessarily subjectively interpretative, relying on your clinician’s supercalifragilistic powers of intuition.

Ethics, the law and new directions

Attorney Jim Gottstein’s groundbreaking book, The Zyprexa Papers (2020), explicitly reveals the profound harm caused by neuroleptics. Given the grievous effects of neuroleptics, weighing all prognostic options, psychiatrists ought to justify prescribing neuroleptics, reserving their use for the most intractable psychotic disorders, yes? Psychiatrists uphold the Hippocratic Oath as per their medical training: to practice ethically without maleficence and ‘do no harm.’

The evidence against neuroleptics is irrefutably mounting, impervious to gaslighting by the pharmaceutical industry incentivizing prescribing psychiatrists. Lilly would not have subjugated the damning Zyprexa Papers unless they knew the coveted scientific reality were so very powerfully persuasive. When challenged, Lilly defended Zyprexa with vigor.

The denouement to Gottstein’s lawsuit against Lilly? By January 2009, nakedly exposed and exhausting their defensive ‘smoke and mirrors’ bravado, Lilly conceded, paying 1.4+ billion dollars to resolve off-label promotion of Zyprexa. Lilly’s settlement was the largest individual corporate criminal fine in history. In sum, hold onto scientific evidence, the truth, and never let go! Refer to Figure 6.

To aptly quote Glinda the Good Witch of the North’s sage advice to Dorothy when threatened by the Wicked Witch of the West, “Keep tight inside those ruby slippers. Their magic must be very powerful, or she wouldn’t want them so badly.”

Developing novel therapeutics to treat thought disorders is long overdue. Rather than pridefully defending agents that do not work, let us learn from such mistakes, moving forward with curiosity, compassion, bravery and ‘fresh eyes’ to find better solutions. Refer to Addendum.

I am an independent consultant, a neuroscientist (PhD) and criminal behavioral profiler (D-ABP) with expertise in bloodstain pattern analysis.

I am the sole author of this report and declare no conflict of interest. All contents referenced from this document must be cited directly to me. Questions and comments are welcome. AD

Modern research addressing alternatives to neuroleptic drugs must be equivocally considered, revising existing therapeutic applications accordingly. The following lists are by no means inclusive, but rather suggestive of possible options.

Saccadic eye movement may be applied to treat major psychiatric disorders. Such applications have made great strides in ameliorating post-traumatic stress already. E.g.,

Exercise therapy including yoga for psychiatric conditions may particularly help reduce negative symptoms of schizophrenia and increase self-control, esteem and sociability. The role of exercise in mood disorders and related neuropathic pain (fibromyalgia) have been promising. E.g.,