Violent behaviors associated with sleep are a rare occurrence, affecting approximately 2+% of the populace (Schenck, 2019; Weiss, 2011) and only a fraction of these instances involve criminality. Adjudicating such episodic cases can be confounding since sleepers necessarily lack intentionality.

Sleep is not a void of consciousness, but rather represents altered states of consciousness. The human brain is dynamic with fractionated functionality, so no single phase of sleep or wakefulness ever globally controls the brain. Unlike being generally anesthetized, the sleeping brain is a not a passive bystander in the ‘switched off’ position. Instead, the brain deftly shifts between phases of non-rapid eye movement (NREM), rapid-eye movement (REM) and wakefulness like an auto transmission to optimally steer the sleeper through the night.

Potentially violent sleep disorders, notably parasomnias, occur as the sleeper shifts between these phases, or, envisioned as a Venn diagram, when these states simultaneously overlap, precariously stranding the sleeper in unchartered mental territory. Refer to Figure 1. 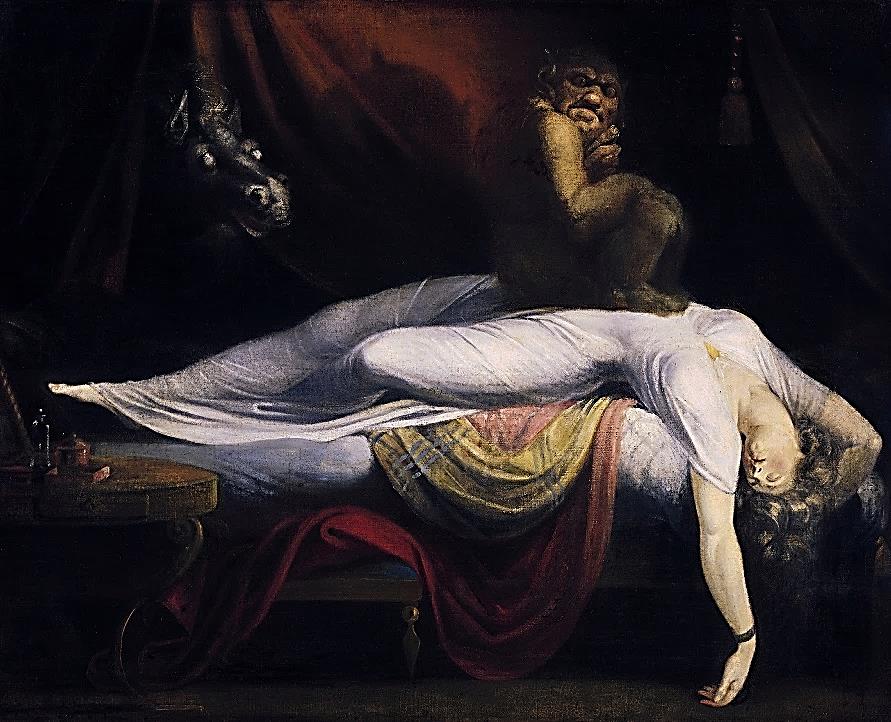 While awake, perceptions are vectored towards reality that is our external environment, responding to stimuli with interactive engagement. Conversely, we are disengaged with reality during sleep. This perceptual distinction is outstanding considering that sleep accounts for a third of our existence. Refer to Figure 2. 10, 9, 8, 7…..Now you are getting very sleepy. So what really happens in the dark hours of the night? Follow me.

During NREM1, the hypnogogic stage of sleep, electroencephalogram (EEG) recordings reveal an approximate 50% reduction in neural activity, deepening the amplitude of theta brain waves measured in microvolts per second (μV/s). There is a threshold of awareness during NREM1. Imagine drifting off while reading on the cozy sofa (not this report though) or sort-of sleeping on a long airplane flight. Bang! Your attention snaps back into focus with any arousing stimuli, such as a knock on the door or alarm bell. Hypnotists coax you into NREM1, maintaining this state while giving you suggestions.

Progressing deeper into NREM2 sleep characterized by sigma waves, bursts of neural oscillatory activity known as sleep spindles occur. Spindling represents neurons firing in synchronicity, connecting across the neocortex. Spindles are associated with the consolidation of long-term memory and sensory processing integrated with emotional expression. Organs are regenerating at the cellular level, the immune system is restoring, etc. Muscle tone is increasingly relaxed through NREM2, 3 and 4.

– Side note: EEG recordings reveal that sleep spindling patterns in the schizophrenic brain are lacking or aberrant. Would adjusting sleep patterns be therapeutic for those with schizophrenia and related psychotic disorders? But back to the story.

Fast asleep, NREM3 and 4 now ensues, deep amplitude delta waves. By now, the sleeper is insular to wakefulness, nearly impervious to otherwise disruptive stimuli. If the sleeper is somehow forcibly awakened, then they may be disorientated and agitated, stumbling from bed. Appropriately termed in French, l’ivresse du sommeil, the “drunkenness of sleep.” If you have ever overslept through an alarm, grumpily fixing your first cup of morning coffee, blame NREM4.

– Side note: During my neuroscientific research, I was involved with stereotaxic brain surgery on laboratory rats. Ketamine, a dissociative agent, was titrated so that the rat was deeply anesthetized with absent reflexes throughout the surgery till recovery. However, touching the rat’s neck still elicited a twitch. Why? Evolutionarily, rats have conserved their ancient defenses, protecting their vulnerable jugular vein despite being deeply anesthetized. But back to the story. 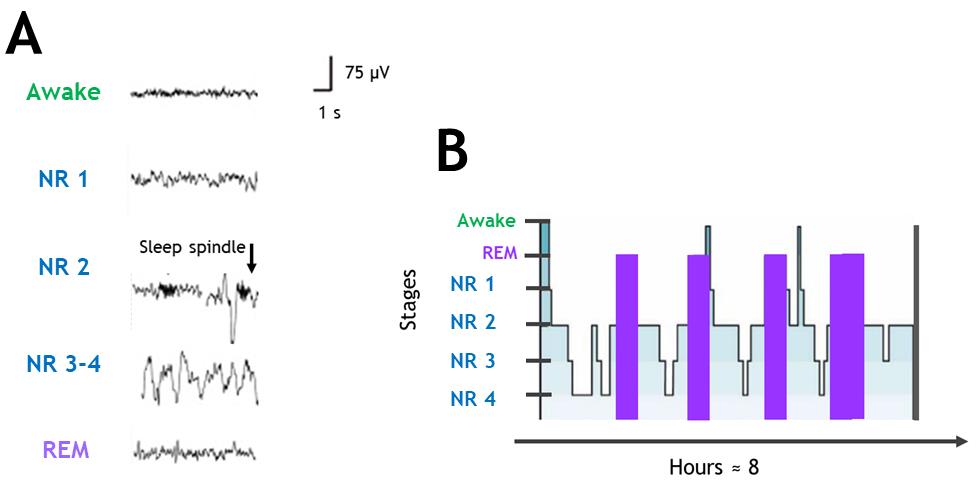 If the demarcation between the various sleep stages blurs, concurrent states of disordered arousal elicit a behavioral brew storm that can be potentially violent. Episodic violence during sleep affects approximately 2+% of the population (Schenck, 2019; Weiss, 2011) with a subset of these cases involving criminality. Parasomnias pose an enigmatic dilemma since sleepers are neither truly awake nor asleep, yet their actions seem surficially volitional. Refer to Table 1.

Somnambulism (sleepwalking) is an amalgam of deep delta wave NREM sleep stages and wakefulness. Approximately 3% of the genetically predisposed adult population may innocuously experience sleepwalking, not usually entailing violent behavior. Children, teens and young adults are most prone to sleepwalking, although exceptions abound. ‘Walking’ may be a generalized misnomer, however, since sleepwalking also encompasses other physical activities, ranging from eating, driving, making phone calls and even holding conversations (although the sleeper is not at their witty best) with slurred or strange speech, and other related tasks. The sleeper may appear confused or even pedantic, behaving as if an automaton.

The sleepwalker is not dreaming, but rather experiences a dissociative state of consciousness coupled with motor activity. Occurrences are most often reported in the early nighttime hours, relatively soon after the onset of sleep. Sleepwalkers are notoriously hard to rouse, awaking agitated and disorientated. While visual processing allows the sleeper to navigate, their unfocused stare is devoid of the realistic identification of visual stimuli. After all, we perceive with our mind (specifically via the occipital lobe and visual cortices), not our eyes.

Confusional arousals entail the sleeper waking into a dissociated state of consciousness devoid of any later conscious memory. Sleep terrors occur when the sleeper screams during sleep, sometimes becoming physically assaultive. Related, sleepers with periodic limb movement disorder can injuriously enact their dreams, though usually confined to their bed.

Sleep paralysis is a scary transitory episode sandwiched between waking and REM sleep with muscle atonia such that the sleeper cannot move during a nightmare, oftentimes reporting the sense of being in the presence of an oppressive stranger (Figure 1).

Dyssomnias are a class of conditions such as insomnia, narcolepsy and circadian rhythm disorders that exist beyond the scope of sleep. Dyssomnias can potentiate risky behavior, compromise reaction time, limit attentional focus and interfere with good judgment. If you have ever pulled an all-nighter while cramming for an exam, or travelled across multiple time zones, you have experienced acute dyssomnia. Salute to the coffee industry.

Imagine living eons ago, huddling around the light of a bonfire as night falls, finally retreating to the security of your cave with companions in darkness. Sleep leaves you vulnerably exposed to dangerous predators who may be lurking invisibly in the dark. Still the phenomena of sleep is shrouded in mystery. Provocative renditions of sleep are expressed through historical storytelling cross culturally. Refer to Figure 3.

The Sandman is historically described in folklore (circa 1700s onward), known as Moș Ene (Romania), Ole Lukøje (Germanic) or Bonhomie sept-heur (French Canadian), etc. The Sandman sprinkles dust in the eyes of dyssomniac children, prompting them to dream by holding an illustrated umbrella over their beds. Sinister accounts report that the Sandman sprinkles dust in children’s eyes to blind them, resultantly capturing them or collecting their eyes during sleep. This depiction describes the sight of a sleepwalker, seeing with the mind rather than the blind albeit functional open eyes.

Werewolves may exemplify morphing from normalcy into a dangerously murderous being, triggered by moonlight, indicative of RSBD, then waking without memory recall of the nocturnal event. Sleeping Beauty falls into a virtually impenetrable state of deep delta wave sleep (Figure 2A).

The Golem (גלמי, Hebrew, Psalm 139:16) describes a suggestible automaton-like being who wanders in a sleepwalking stupor. The Golem’s innocuous wanderings may become unpredictably hostile under threatening circumstances, akin to a parasomniac arousal disorder. Sleep paralysis provides a thematic account for alien abduction phenomenon, the sleeper experiencing a preternatural sense of being watched or examined while defenselessly powerless to intervene on their own behalf. 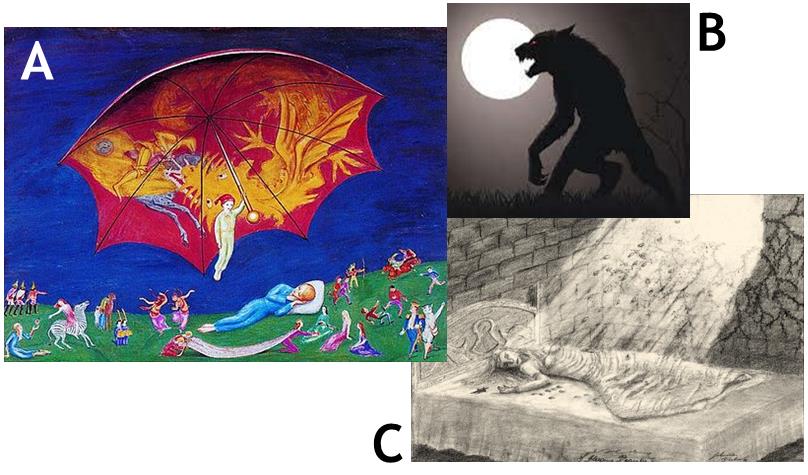 Neuroscientists learn the most about the brain when something goes wrong with it. Sedating psychotropic drugs (benzodiazepine class known as hypnotics) prescribed to treat insomnia can be effective, however, a paradoxical side effect can be physical activity while asleep. Historically, during my doctoral neuroscience research, I was curious about why. Refer to Figure 4. No need to struggle with my handwriting (Figure 4A), here is the upshot:

– Neuroscience primer: Hypnotics work by activating inhibitory receptors in the brain. Gamma aminobutyric acid (GABA) is an inhibitory neurochemical associated with sleep. By design, neurons each have specialized receptors on their surface membranes activated by various neurochemicals such as GABA – imagine them like little electrical outlets.

There are two subunits on each GABA receptor: GABAA and GABAB. This design accounts for why muscles are still during REM sleep. The outstanding issue is that hypnotic drugs may only activate one of the two inhibitory GABA receptors, allowing complex repertoires of physical activity to occur even while you are sleeping!

A Massachusetts man (2006) under the influence of the hypnotic drug Zolpidem (Ambien) was driving while soundly asleep, fatally crashing into a stranger who was changing his flat tire on the roadside (Weis et al., 2011). This notorious case was successfully defended, exonerating the sleeping driver, and other similar therapeutic misadventures involving such psychotropics have occurred too.

My unsolicited advice? Nix the hypnotic prescription and go with milk and cookies and counting sheep instead. 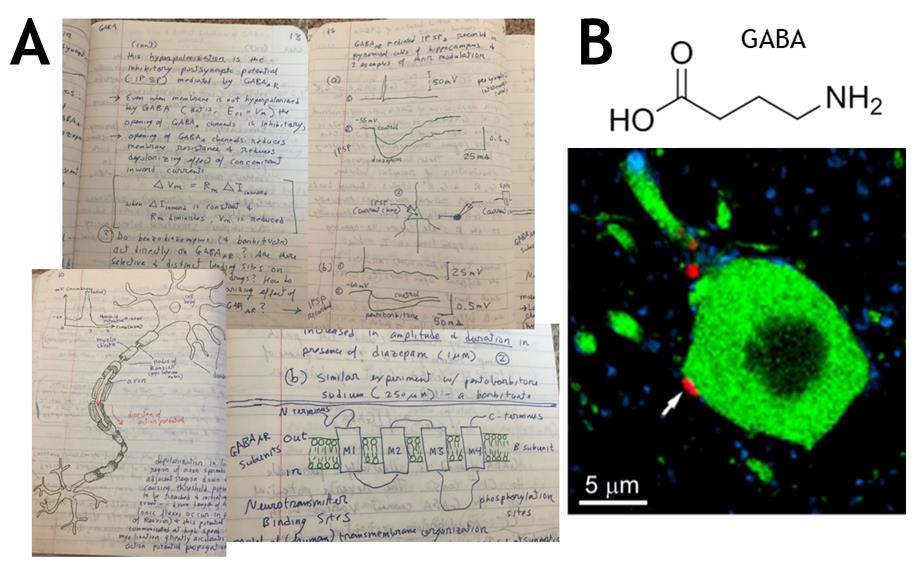 A Photographs of pages from my old laboratory notebook, asking why benzodiazepines might bind selectively to GABA neural receptors in the brain, thus allowing for motor activity during sleep resulting in episodic somnambulism. B My confocal microscopy image showing a neuron (green) being inhibited by GABA (red), scale bar = 5 microns (μm). The chemical structure of GABA above. Figure by Du Beau.

Parasomniac sleepers exhibiting automatisms exist in the unchartered mental territory of altered consciousness, neither precisely awake nor aware. The preponderance of sleep disordered incidents do not involve violence. Most sleepers only selectively remember dreams after waking, and, of course, are not responsible for the content. But what if that nightmare actually comes to fruition?

Criminal behavior leading to conviction necessitates the commission of a prohibited act, actus reus, coinciding with a guilty state of mind, mens rea. Sleep is not a state of insanity, of course, and sleepers do awaken. However, volitional intent is necessarily absent during sleep, which carries substantial legal ramifications (Model Penal Code).

Where is the statutorily defined demarcation between knowledgeable intentionality and recklessness? Making inferential assessments about a sleeper’s mental state can be a challenging task for adjudicators of the law, especially leery of malingering. Neuroscientific investigations of parasomnias inform the jurisprudence of sleep related violence.

The following criteria must all be met to satisfy the legal plea of parasomnia:

Sleep stages represent active neural states, yet still may be regarded as elusive since sleep lies within the realm of altered consciousness. This report explores sleep related violence as a phenomenological subset within the spectrum of sleep disorders with forensically identifiable determinants. Since parasomniac sleepers necessarily lack intentionality, triers of the law give special credence when adjudicating sleep related offenses. Enriching our understanding of parasomnias and dyssomnias lends to revealing the neurobiology underlying states of consciousness, running parallel to inform the jurisprudence of sleep related violent behaviors.

“Let us sleep for in dreams we enter a world that is entirely our own. Let us swim through the deepest ocean or glide over the highest cloud.” ― Albus Dumbledore (J.K. Rowling)

This report is not intended to be an exhaustive review of sleep disorders. I declare no conflict of interest. Questions and comments are welcome.

This report and all contents must be cited: Du Beau, A. (2020). Sleep and violent behavior. https://matanuskaforensicscience.com/

Popat, S., Winslade, W. (2015). While you were sleepwalking: science and neurobiology of sleep disorders and the enigma of legal responsibility of violence during parasomnia. Neuroethics, 8, 203-14.